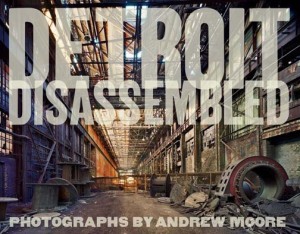 Andrew Moore’s photographs of the Motor City are sublime—beautiful, operatic in scale and drama, tragic yet offering a glimmer of hope. They are the subject of Detroit Disassembled, an exhibition organized by the Akron Art Museum making its debut here before touring nationally. Detroit, once the epitome of our nation’s industrial wealth and might, has been in decline for almost a half-century. The city is now one-third empty land—more abandoned property than any American city except post-Katrina New Orleans.

Moore’s images, printed on the scale of epic history paintings, belong to an artistic tradition that began in the 17th century. Numerous artists have used ruins to remind their viewers of the fall of past great civilizations and to warn that contemporary empires risk the same fate. Moore’s soaring scenes of rusting factory halls and crumbling theaters share the monumentality of Giovanni Battista Piranesi’s 18th century engravings of the fallen civic monuments of ancient Rome and Greece. His photographs of skeletal houses and collapsed churches carry forward the Romantic tone and rich hues of Caspar David Friedrich’s 19th century paintings of fallen medieval cathedrals and castles. Although hard to believe that Moore’s post-apocalyptic scenes reflect present-day America, he has been scrupulously honest, creating photographs that are both documentary and metaphorical in nature.

The Opening Party is supported by a generous gift from Mr. and Mrs. Robert Weisberger.