Imagine this. You visit the Akron Art Museum and fall in love under the “roof cloud” (the museum’s 327 foot long steel cantilever that joins the old 1899 post office building with the new 2007 Coop Himmelb(l)au structure). No, not with some beautiful stranger you exchange eye contact with across the museum’s lobby (although that would be pretty exciting too). Instead, you fall in love with a beautiful artwork. Maybe you’re a fan of American Impressionism and succumb to the charms of Abel G. Warshawsky’s pure color technique in The Seine at Andelys showing in the McDowell Galleries (and also installed as a reproduction at the International Institute in North Hill as part of the Inside|Out project). Perhaps you prefer your artists a bit more surrealistically inclined and become entranced by Art Green’s Delicate Situation in the Haslinger Galleries. Or possibly, landscape photography is more to your liking and you discover Robert Glenn Ketchum’s CVNRA #866 (from the Federal Lands Series), on view in the Arnstein Galleries as part of Proof: Photographs from the Collection. 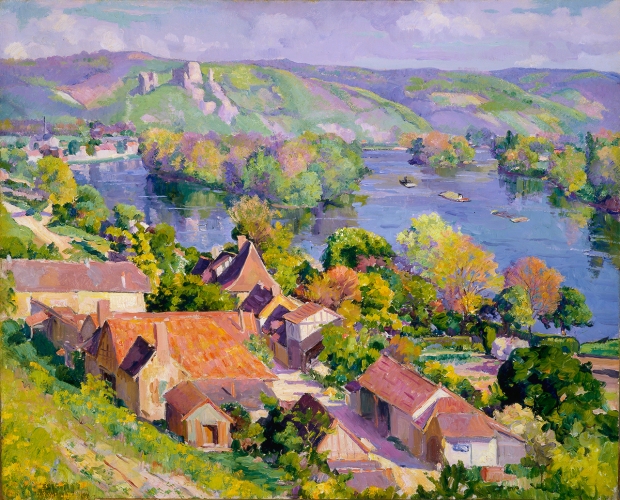 Abel G. Warshawsky, The Seine at Andelys, 1923. Oil on canvas. 32 in. x 39 1/4 in. Collection of the Akron Art Museum. Gift of Miss Malvyn Wachner in memory of her brother, Charles B. Wachner.

Like the start of any epic love affair, you are captivated. You have to know more. So, you head in to the museum’s Martha Stecher Reed Library to do some research. The librarian hands you your desired books and you dive right in. Much to your delight, the books are autographed.  The Akron Art Museum is full of surprises. 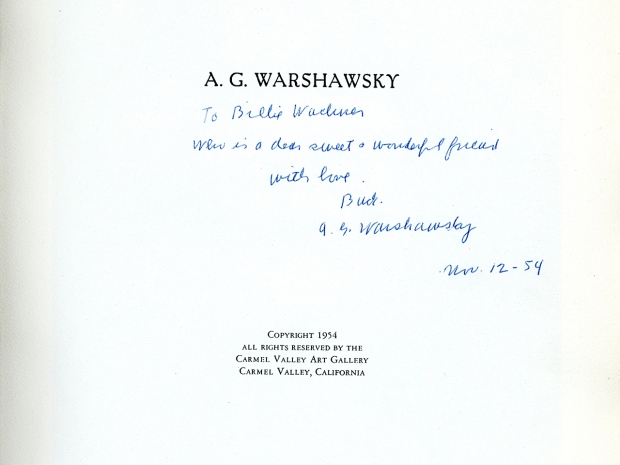 Abel G. Warshawsky: Master-Painter, Humanist by Louis Gay Balsam came into the library’s collection in 1959 at the bequest of Mrs. Minna Wachner, whose generous gifts to the museum also include two oil paintings: Le Pont de la Cité, Martigues by Warsharsky and Landscape by William John Edmondson. The book, which is mostly dedicated to fifty black and white lithographs reproducing the artist’s work, was published by the Carmel Valley Art Gallery that, while no longer in existence, was once near to the artist’s Monterey, California home where he lived after his return from Paris in 1939. Dedicated to Billie Wachner, “Who is a dear sweet and wonderful friend [sic],” Abel signed with his nickname, Buck, as well as the longer A.G. Warshawsky. 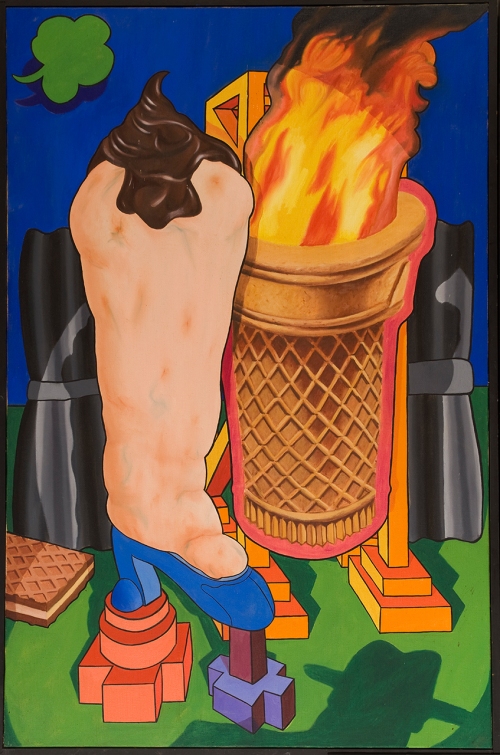 Art Green, Delicate Situation, 1968. Oil on canvas. 69 in. x 45 in. Collection of the Akron Art Museum. Gift of William and Deborah Struve. 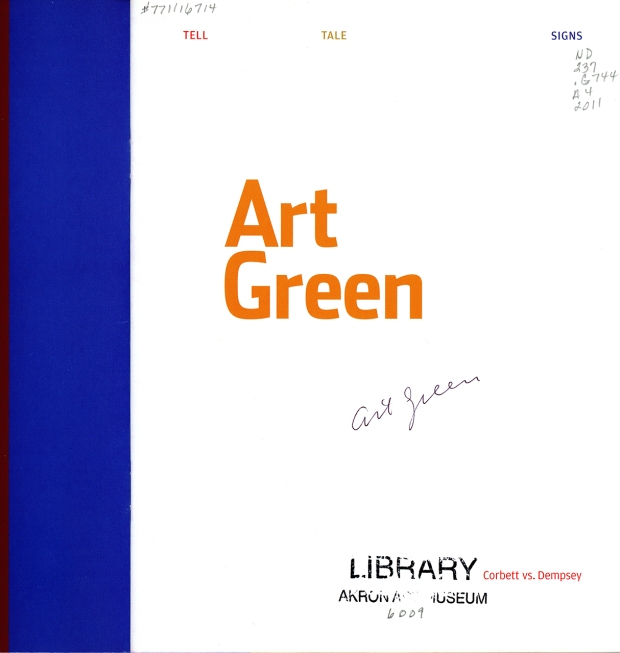 Autographed copy of Art Green: Tell Tale Signs accompanied an exhibition of the same name at the Corbett vs. Dempsey Gallery in Chicago, held from December 9th 2011 through January 21st 2012.

Art Green: Tell Tale Signs accompanied an exhibition of the same name at the Corbett vs. Dempsey Gallery in Chicago, held from December 9th 2011 through January 21st 2012. While the exhibition focused on work created years after Delicate Situation, the interview at the beginning of the text explains some of Green’s recurring  images, namely, the ice-cream cone and the flame that are found in Delicate Situation. Green states, “The image of the ice cream cone interested me because it is so idealized, not because of any specific symbolism. I like opposition and the flame offers that here” (p. 5). Another autograph can be found in Art Green, published by the CUE Art Foundation in 2009 to accompany the first solo exhibition of the artist’s work in New York since 1981. This exhibition was curated by Jim Nutt, who, along with Green, was a member of the Chicago artist group, “The Hairy Who,” that consisted of five recent graduates from the Art Institute of Chicago known for their grotesque subject matter and carefully finished style.

Robert Glenn Ketchum, CVNRA #866, from the Federal Lands series, 1988. Cibachrome print. 24 in. x 30 in. Collection of the Akron Art Museum. Purchased with funds from Kathleen and Gordon Ewers.

In 1986, the Akron Art Museum commissioned Robert Glenn Ketchum to photograph the Cuyahoga Valley National Recreation Area (CVNRA). Many of these images, taken over the course of several years and throughout different seasons, were later published in Overlooked in America: Photographs by Robert Glenn Ketchum. Compared to the understated signatures contributed by Warshawsky and Green, Robert Glenn Ketchum’s autograph takes on an almost landscape-like quality, with sweeping, flowing organic lines. Ketchum’s book uses the CVNRA as an example of national parks in general, exploring how man and nature interact and how the government manages its federal lands. The CVNRA series can be read in conjunction with another museum commission. In 1979, Lee Friedlander (whose work is also included in Proof) was contracted to photograph the industrial landscape around the Akron/Cleveland area, popularly known as the rust belt. In comparison to Friedlander’s bleak emphasis on desolate factories and the urban landscape, Ketchum’s landscape photographs demonstrate the natural beauty of the Akron area. 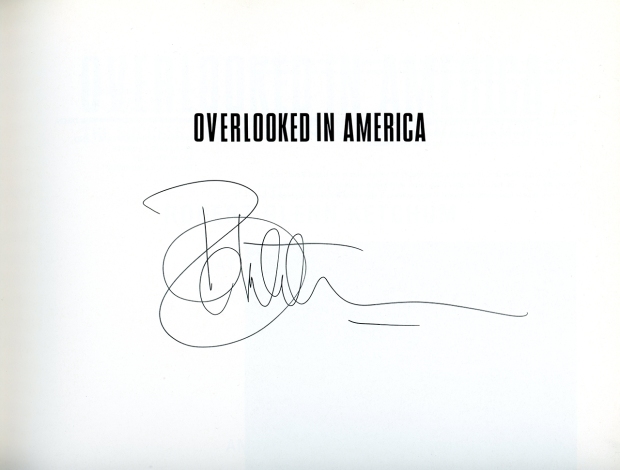 What is it about an autograph that seems to impart some extra knowledge about a person? Sometimes it’s what the person says in an inscription, as in the case of Abel G. Warshaswsky, that gives some insight into the artist’s life. Other times, it’s the style of the handwriting. Whatever the case, it’s an interesting and delightful surprise to discover these autographed works because you seem to get just a bit more information about the artist, something more human than what is captured in the descriptions and analysis of their work.