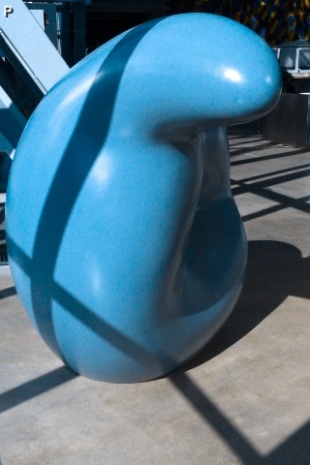 This image is from one of the most popular posts from our blog this year (and ever). Here the Inverted Q is shown through the Chromatic Vision Simulator’s Protanope filter. To view the Q’s typical appearance, visit the Akron Art Museum’s Online Collection.

2012 has been an exhilarating year for the Akron Art Museum. We continued to launch our new visual look, celebrated 90 years in the community, exhibited monumental art and made major leadership changes.

We really kicked off the year with our 90th anniversary celebration in February. The performance included abstract painter Al Bright in concert with the Jesse Dandy Band. In March, Ray Turner: Population opened featuring an ever-expanding series of portraits, including key Akronites from the University Park neighborhood and even some Akron Art Museum staff.

April and May saw the staff preparing for the sale of Cindy Sherman’s Untitled #96 at Christie’s Post War and Contemporary Art – Evening Sale on May 8, 2012. The money raised from the sale created a new acquisitions endowment. We retained another 1981 masterpiece by Cindy Sherman from the Centerfolds series, Untitled #93 (Black Sheets), subsequently named Sherman the 2011-2012 Knight Purchase Award recipient and purchased several works from her Bus Riders series.

Gravity and Grace: Monumental Works by El Anatsui opened in June with the artist present in Akron! The Akron Art Museum was the first modern and contemporary art museum in the US to collect Anatsui’s work and is thrilled to organize the major traveling exhibition. Huffington Post recently called its presentation at the Brooklyn Museum one of “The 25 Most Anticipated Exhibitions of the New Year.” You can catch the exhibition on its national tour through 2014.

The summer sizzled with the always popular Downtown@Dusk concert series and the new to 2012 ArtCamp@Dusk for kids to enjoy while their parents listen and embarrassingly dance to music. In July, we launched our completely redesigned website and enacted two major admission changes. Children 17 years and younger are now admitted FREE to the museum’s galleries. Beginning in July, visitors receive FREE admission to the collection and exhibition galleries all day from 11 am – 9 pm, on the third Thursday of every month.

After 26 years as director, with one of the longest tenures of any art museum leader in the country, Dr. Mitchell D. Kahan announced to the Akron Art Museum’s Board of Trustees that his resignation, effective January 2, 2013, and assume the title of Director Emeritus. Janice Driesbach joined the staff in August after a yearlong national search, as the museum’s new Chief Curator and was named Interim Director in December.

The colder weather hasn’t slowed down this mammoth year. Sculpture exhibitions Adolph Gottlieb: Sculptor  and New Artifacts: Works by Brent Kee Young and Sungsoo Kim opened in late October.  In November, tribute was paid to Dr. Mitchell D. Kahan during a formal dinner on November 10 and a community day on November 11. Holiday mART expanded its hours to reach more people this year and the popular Island of Misfit Toys once again sold out.

You might think all of this is enough for one year, but think again. Just as many people were planning their final holiday shopping or how to best spend the time off with family, the Akron Art Museum announced a pledge from museum supporters Rick and Alita Rogers as the lead gift for the design and construction of its long awaited outdoor sculpture garden. The completed outdoor gallery and multi-use space will bear the name of Bruce and Susanne Rogers, Rick’s parents, who are among Akron’s most devoted community boosters.

From September to December, we added 131 new objects, many of which were donated in honor of Mitchell.  The museum’s commitment to photography holds strong and over half of the works in the collection are photographs. You can check out the museum’s collection at www.AkronArtMuseum.org/collection.

As for the blog, some of the most popular posts have been The Q is Blue!, Staff Interview: Special Events Manager Sheri Stallsmith and Photographic Masks from the Collection.  We have some posts planned for the next couple of months that we can’t wait to share with you.

Don’t think the Akron Art Museum will rest on its laurel in 2013. As the search for a new director continues, the museum will open some amazing exhibitions and put on some great events.

The Snowy Day and the Art of Ezra Jack Keats pays tribute to award-winning author and illustrator Ezra Jack Keats (1916–1983), the first to feature an African-American protagonist in modern full-color picture books and will open on March 16, 2013. The exhibition Draw Me a Story (February 9 – August 4, 2013) will celebrate Keats’s legacy and the power of visual literacy and multiculturalism. Elementary students from area schools will created collaborative picture books. The student artists will also meet and work with award-winning children’s book author and illustrator Duncan Tonatiuh, who will be here in the spring.

Drawn entirely from the museum’s collection, Danny Lyon: Bikeriders highlights one of the artist’s most celebrated bodies of works. Now, nearly 50 years after their creation, the images retain their original power and raw energy. Line Color Illusion: 40 Years of Julian Stanczak showcases paintings and prints collected by the Akron Art Museum since 1970. The exhibition documents both Julian Stanczak’s impressive career as a master of color and the museum’s longstanding commitment to his work.

Art and Ale returns this year on March 8 and the galleries will even be open for the first hour! Get your tickets now to take advantage of special pricing. Meanwhile, kids and teens will be delighted with our studio class offerings, but don’t wait to sign up because these classes are in demand.

This year’s Island of Misfit Toys workshop was a blast! We had a sold-out crowd of over 250 people who came ready to build misfit masterpieces. Families hammered, smashed and hot glued to their hearts content, transforming toys into spectacular sculptures (with the help of some googly eyes). We saw a tennis ball Spongebob Squarepants, basketball hoop train station and many wild animal creations. In addition to being creative, attendees were incredibly generous as they each came with a new toy to donate to Toys for Tots. Thanks to everyone who attended. We hope you can join us again next year. In the meantime, don’t throw away any old or broken toys- we’ve already started collecting for next year!