The museum’s Judith Bear Isroff and Fred and Laura Ruth Bidwell Galleries offer ideal opportunities to bring together thematic exhibitions from our collections. These galleries are particularly well suited for featuring works on paper and photographs that are vulnerable to light, and so cannot be on view for extended periods of time. When I first started thinking about the exhibition that became Altered Landscapes, I was eager to showcase relatively recent gifts that we had not had yet been able to share. These included Meridel Rubenstein’s Temple Tree, Vietnam and Yun-Fei Ji’s Three Gorges Dam Migration, both donated in honor of former director Mitchell Kahan on the occasion of his retirement.

I appreciated how Rubenstein’s incorporation of unconventional materials into the photograph, including vegetable ink and mica, were beautifully employed to convey how the ancient tree had been honored. It was also clear that, with the construction of the surrounding temple, the landscape’s original context was transformed centuries ago. In contrast, the soft colors and traditional format of Yun-Fei Ji’s scroll invite us in to view the tragic consequences of a much more recent change—the construction of the Yangtze River dam that buried thousands of villages and displaced more than a million people.

Certainly as we head into our parks and the countryside today, there is little that has not been impacted by the human presence. Much that may strike us as pristine wilderness is in fact second- or third-growth forest and shelters numerous invasive species. In addition, since the invention and proliferation of photography, the detailed views that artists spent extended time rendering can be captured and disseminated instantaneously. The role of the artist has changed and Altered Landscapes allows us to present some of the ways contemporary artists have responded to this traditional subject.

I take particular delight that as the exhibition came together we were able to include other artworks that have not been on display before. These include Randall Tiedman’s Limbus Patrum #7, a gift the museum received just a few months ago. A lifelong Cleveland resident, Tiedman developed his impressive composition from imagination, informed by his intimate understanding of the industrial landscape. In contrast, Wayne Thiebaud, painted River and Slough, a view of his beloved Sacramento Valley, in his studio from sketches made on the spot. And, Joseph Yoakum was probably inspired to depict Mt. Banda Banda in Great Dividing Range near Kempsey Australia by a magazine illustration rather than firsthand observation—all very different approaches. 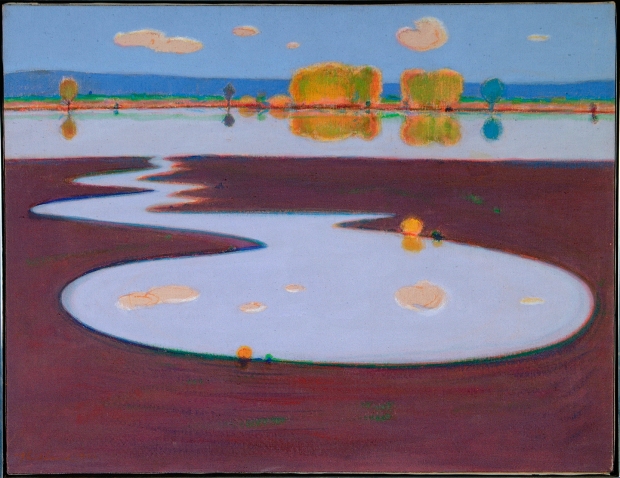 With artwork ranging from Mark Soppeland’s glitter-laden sculpture Bridge over a Strange Place to Lilian Tyrrell’s powerful Disaster Blanket, Altered Landscapes truly brings together a wide range of styles and media in addressing its theme. It is my hope that visitors will enjoy making comparisons and that they consider extending their visit by wandering into our C. Blake McDowell, Jr, Galleries on the first floor of our 1899 building. There they will see earlier interpretations of landscape subjects, including outstanding Impressionist and Tonalist paintings and early 20th-century views of our region.